As the waters are up and coloured at the moment, tying up some new pike leaders is the order of the day. 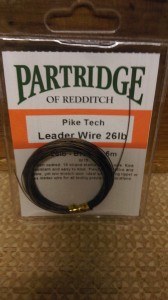 I have been using the Partridge Pike Tech leader wire which is manufactured from nylon coated 19 strand stainless steel wire. The wire is very flexible, kink resistant and easy to knot which makes things easy when it comes to attaching it to the end of a tapered leader at one end and to a snap link  it at the other. 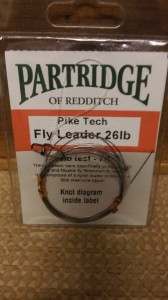 For those of you that don’t fancy making your own leaders, Partridge produce Pike Tech ready tied leaders with a loop for a simple connection to the loop on the end of your fly line, perfect for a bit of winter piking!

Basic watercraft is one thing I try to teach guests on a regular basis while out instructing and guiding as it is the key to becoming a successful angler. It’s all about the location as I found out while fly fishing for pike recently.

This principle was backed up while on a trip to the Somerset levels. Given that I had access to quite a large stretch of river and only a limited time I hatched a plan of attack to optimise my chances.

With a bit of research I opted for a stretch of water a couple of hundred yards long with an island at the top of the stretch and a bridge at the bottom, both fish holding features in an otherwise pretty featureless river. 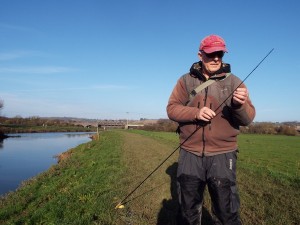 Setting up in bright sunshine, opposite the island, I was quite pleased that I had camouflaged my wire leaders the day before to stop any glare off of them. The weather did not scream “bonanza day” to me as it was unseasonably warm. I prefer cold crisp days with a frost for piking, I guess it’s because I’ve had more success on days like this.

Upstream there was a few coarse anglers on the opposite bank steadily catching roach and the like, so I was happy that there was plenty of pike fodder in my chosen stretch. All that was left to do was to select a fly and take the plunge. 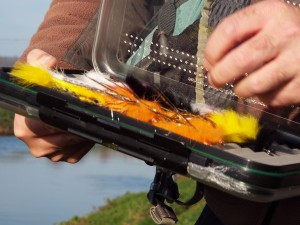 I concentrated on casting up to the island as I thought this may hold a fish or two as they lie in wait to ambush any bait fish. I worked my way down the island casting into all the nooks and holes opposite me and from different angles with different retrieves, dead slow to stripping at high speed, but all to no avail.

So what next? The next stretch looked pretty uninviting and featureless compared to the island stretch, there was literally zero cover for pike to hide out in to ambush their prey. Only the bridge in the distance looked inviting with fish holding potential. I decided as time was precious just to have a few casts here and there and keeping mobile whilst working my way down to the bridge, but again there were no sign of any toothy predators. 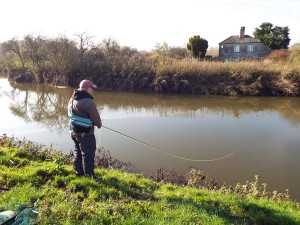 When I was about 40 yards from the bridge, out of the corner of my eye I caught a glimpse of bait fish leaping clear of the water on the far bank, a sign of larger fish charging these bait fish, found them at last! As I got closer the pike gave itself away by swirling at the surface as it made another lunge at its next meal. 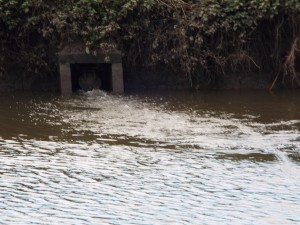 So why were there so many bait fish in this one particular area? As I got to the spot it was obvious. There was an outlet pipe in the river bank that was sporadically spewing out into the river, at a closer glance it looked to come from the water works in the distance so I guess the discharge was either warmer water or it had some sort of nutritional value which held the bait fish in high numbers in this spot. Not obvious, but there you have it, a fish holding feature which in turn attracted the larger predators. In terms of watercraft, an “unnatural or man- made feature”. 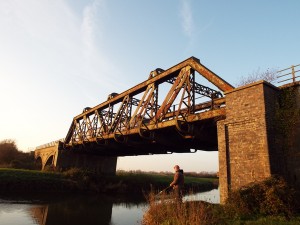 It wasn’t ideal fishing to this feature from the bank I had chosen as it was difficult to get the fly to “fish” properly casting across the flow and coupled with the flow coming out of the pipe. I persevered though as I didn’t have time to cross over and the fish kept showing itself which kept giving me encouragement. I had just about given up hope when I decided to change my angle of attack and then it happened, a sudden tightening of the line in my hand followed by all hell letting loose as the fish made a bid for freedom. After a few minutes of feisty fighting the fish was being slid to the net. A perfect end to not a prolific session, but a really satisfying one. 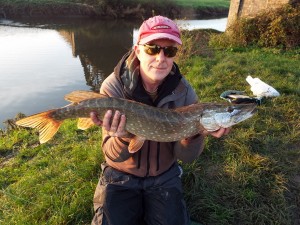 A big thank you to my wife for having to endure my perseverance with not a lot happening, whilst taking the photos of the day.