Tailing loops and wind knots are the curse of the fly angler but what causes them?

Being early season I have been spending a lot of time on the bank with guests wanting to “tune up” their casting techniques and one comment I have been getting on numerous occasions is “after a couple of hours of fishing, knots appear in my leader and I don’t know why”.

Wind knots are not generally caused by wind but by poor casting technique…..but then who is going to admit they suffer with poor casting knots?! So what is causing these poor casting kn…..I mean wind knots?

With ever progressing tackle technology comes the promise of casting further with the latest product, true some rods and lines will cast further than others but only with the correct technique. This greater “distance casting product” promise seems to change the mindset of the angler once in the hand,  then in turn the angler puts a bit more “oomph” into their cast to really get the most out of their latest purchase.

Herein lies the problem. With the extra/incorrect power application comes the tailing loop quickly followed by a generous helping of wind knots.

Applying power aggressively at the start of each casting stroke causes the rod tip to buckle and dip, this makes the fly line pass under itself instead of unrolling over itself and then causing knots in the leader. Another cause can be the casting stroke not being long enough in relation to the length of aerialised line. 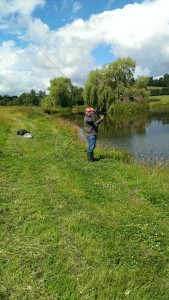 Distance casting will only come with the application of “smooth power” and with good timing, all of which need practice.

To help, when you make a forward cast,  start the stroke by purely dropping your elbow, this in turn will pull your hand forward and make the cast for you. Try to keep your hand passive and not to push the rod with your hand too much but think more about pulling the rod tip from behind you into the forward cast, this in turn should really smooth out the casting stroke and improve your loop. You must however raise the elbow into the back cast so that you can drop it in the forward cast. Give it a go next time you are out with a rod and think “smooth power” as you cast, no jerky, snatching movements!

It’s hard to put this down in words but I will try doing a video at some point to demonstrate this technique more clearly, until then happy casting!